Well, the widow won this round.

Episode 2 of The Handmaid’s Tale‘s fifth season — the second half of a two-episode premiere; read an Episode 1 recap here — found Serena Joy Waterford somehow bending the American, Canadian and Gileadian governments to her will and pulling off a grand funeral in Gilead for Fred. Though Commander Waterford definitely didn’t deserve the pomp and circumstance, greater forces were at work. Gilead’s ruling council considered the event, which would be televised abroad, an impressive postcard for the nascent republic. And Serena saw it as a way to stick it to her former handmaid/Fred’s killer, now free and living in Canada. 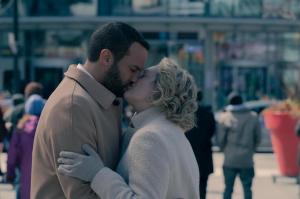 To wit: After June and Luke had a date-day at the ballet, they shared a romantic kiss in Toronto’s city center… and then looked up to see Fred’s funeral procession being broadcast on every giant screen in their proximity. And if that weren’t enough, Serena made a point of stopping by a group of school-age girls to accept a white bouquet from one of them.

That girl? June and Luke’s daughter, Hannah. Serena kissed her on the forehead and then looked directly into the camera, giving viewers a barely perceptible smile.

“We talked a lot about that final — and we have a number of takes — but that final image through that black veil, of Serena Joy and just how much that mouth curves into the slightest smile,” executive producer Warren Littlefield tells TVLine. “Yes, she wants to honor Fred, but this is Serena Joy’s stepping in and getting on the throne, and she’s masterful. She’s powerful. She’s a great chess player.”

Meanwhile, in Toronto, an aghast June and Luke are thinking, “‘She’s got her hand on my kid!’” showrunner Bruce Miller notes, chuckling. 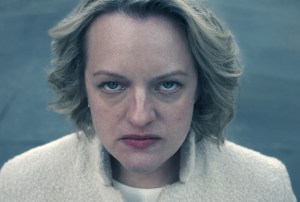 The EPs add that Serena and June’s twisted relationship is at the center of the new season, which will offer insight into both the women’s past and their future.

“And so it begins!” Littlefield says. “Season 5 is all about that gamesmanship. These are two people who hate each other, want at times to kill each other, have the ability to, and then there’s also this fascinating respect that comes into play.”

What did you think of Serena’s masterstroke in Episode 2? Sound off in the comments!

[ad_1] Ant and Dec said ‘our hearts go out to his lovely family’ (Picture: REX…

Who is Keeble’s target as EastEnders sets up Mitchell flashback?

Every word from Mikel’s pre-Zurich presser