Oslo Is Entering a Renaissance

Having grown up in New York City, an international fashion capital with a busy community of high-profile creatives, centuries-old fashion houses, and heritage magazines, it was hard for me to fully grasp the quiet renaissance that is currently taking place in Norway, until I saw it firsthand.

On a recent visit to Oslo to tour the massive project that is Steen and Strøm—the oldest shopping center in the world, which is now being reformatted to focus on luxury—I was able to experience the Scandinavian city’s Fashion Week, their sixth since Oslo Runway launched the event in 2015. 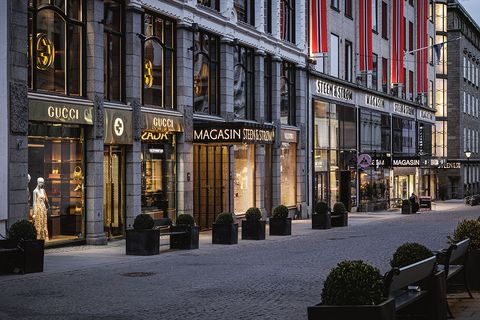 Throughout the week, local designers showed their cool, smartly-tailored collections in front of a local crowd of creatives. Envelope 1976 showed their edgy, minimalistic, party-girl-in-the-city designs in a stark white, industrial warehouse with a concrete floor and walls. One and Other showed their dreamy neutral and pastel-colored staples in their own studio, an all-white flat with large walls and high ceilings with decorative molding. And designer Elisabeth Stray Pedersen, of ESP, showed her sustainable knits and outerwear made from local lambswool in the city’s historic former central library, and had models read and interact with the books while walking down the runway.

For some designers, it was their first Fashion Week, and as up-and-coming brands, they all debuted perfectly edited wardrobes, many of them crafted using sustainable practices, and made-to-order models. Apart from that, the down-to-earth nature and intimacy of the shows made it all feel so new and fresh—no fuss, no intimidation, no ego. Holzweiler’s after party, for example, was held in the docks in Lysaker, an industrial area with an ocean view, bordering Oslo proper. Attendees included emerging local designers, artists, models (the Norway modeling industry is also spiking), and even Shaman Durek Verrett, the fiancé of Norway’s Princess Märtha Louise. Throughout Fashion Week, the country’s royals attended various events, always in good spirits and with no expectations. 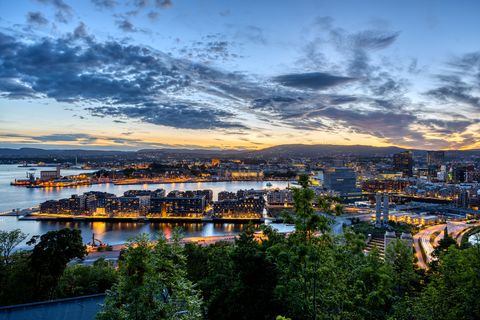 The same peacefulness, kindness, and attention to the environment exists in the city’s docklands district. On cobbled streets, between modern lofts built over clear water canals, are strings of restaurants and boutiques from Norwegian designers—of streetwear, athleisure, and outerwear. Jewelry is also having a moment in the city, with vintage-inspired designers like Aur Studio, refined minimalists like Mold Atelier and eccentric maximalists like Pearl Octopussy, using recycled metals to make their precious pieces.

Overlooking the fjord that borders the shops, surrounded by sculptures, are the art hubs of the city: the Oslo Opera House, designed by local architecture group Snøhetta, and the Much Museum, dedicated to the late Norwegian painter Edvard Munch. A few streets away is the National Museum of Norway, which has recently expanded its fashion archive, and next to it, the soon-to-be-opened International Library of Fashion Research. The first of its kind, the library was founded by 22-year-old Elise By Olsen, who launched her Norwegian fashion paper, Recens, when she was just 13. 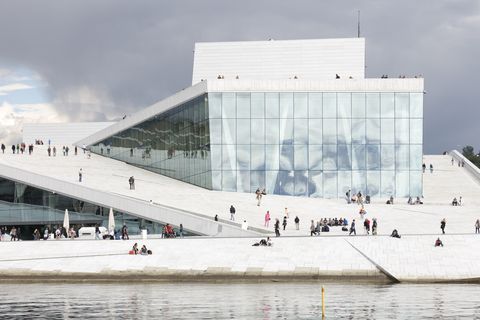 On early weekday mornings, locals swim in the fjord before heading off to work, and on weekends, live bands play near cafés, providing a silky soundtrack for shoppers. Few things are open before 10 a.m. or after 9 p.m., and though most of the population is very well educated, well traveled, and financially well off, it’s not considered cool to be stressed or overworked—let’s call it European Zen. So, for the first time ever, Fashion Week did not feel hectic, not in Oslo.

What is most unique about all of this is that most of it did not exist four years ago. There were few boutiques and restaurants—as it really wasn’t in the Oslo culture to shop or eat out—no luxury stores, and young students didn’t really consider any area of fashion as an approachable or realistic career. Plus, most locals dressed practically, in sportswear, outerwear, and sneakers, not purely to match their active lifestyles, but because being creative with one’s fashion was not common or even considered. Now, more universities in Norway—including Kunsthøgskolen, ESmod, Oslomet, and Sofi School—are teaching fashion, and apart from funding and partnering with local designers to foster new talent and create a larger fashion community in Norway, Steen and Strøm, Oslo Runway, and Promenaden Management (who leases prime retail and commercial buildings in central Oslo), are introducing the concept of luxury into the community. 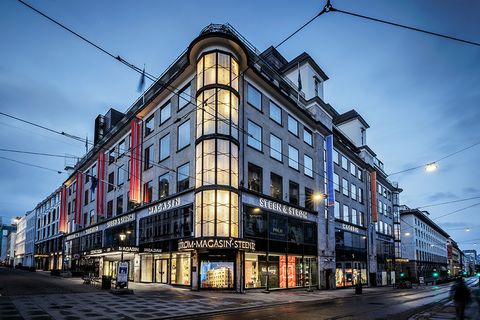 Steen and Strøm, the beating heart of Promenaden, Oslo’s new fashion district, is being reworked to introduce high-fashion and footwear from Adidas to Chanel, as well as designer boutiques inside the shopping center. There is also a beauty floor—where Dior and Fenty Beauty are in the midst of a friendly popularity contest—and a food hall where you can experience various cuisines, including the strange delight that is Norwegian-Mexican fusion.

David Wilkinson and Kaia Kongsli, the executive director and the head of marketing, respectively, said that by honoring Norwegian designers while also bringing in international labels, they hope to make the department store a must-visit destination for both locals and travelers. Essentially, what Bergdorf Goodman is to New York City: engrained in the city’s DNA and undeniably iconic. 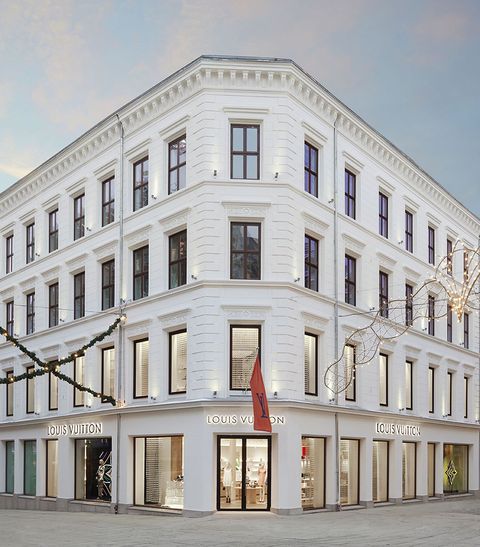 Framing the center, between Oslo’s two main roads, Prinsens Gate (Prince’s Street) and Karl Johans Gate (named after King Charles III John), are the world’s biggest luxury brands, Gucci, Dior, Hermès, Louis Vuitton, Saint Laurent, Burberry, and Rolex, to name a few—an incredibly exciting first for Norway, and Scandinavia as a whole. The two-story Dior ready-to-wear boutique includes an entire menswear floor, and is the first location for the French fashion house in all of Scandinavia.

Though it has only been a few years in the making, and Steen and Strøm’s project is far from finished, the influence of high fashion has already reached the furthest corners of Oslo. Norwegian Rain and SWIMS Norway, both local activewear-meets-outerwear brands, remain immensely popular, but even they are gearing more toward cool, effortless luxury these days.

This introduction to luxury will change Oslo for the better, putting it on the radar to become the next fashion capital, helping highlight its local talent, and pushing residents to take interest and invest in fashion in their hometown rather than elsewhere in Europe. But the goodhearted, grounded nature of the city and its people will never change. The motto of Oslo, Wilkinson and Kongsli told me, is, “No person is better than the other,” and that is how they truly live, with humility at the forefront—luxury labels or not.

[ad_1] So dedicated is Kendall Jenner to all things spooky, she even hosts a combination…

‘She-Hulk’ Release Schedule: When Does Episode 2 Hit Disney Plus?

Stream It Or Skip It: ‘I Came By’ on Netflix, a Sturdy Serial Killer-Thriller That’s as Silly as it is Socially Conscious