Following the Grammy Awards, when the drummer performed, the Keeping Up With the Kardashians actress, 42, allegedly married the Blink-182 rocker, 46.

According to TMZ, Kourtney Kardashian and Travis Barker married after the Grammy Awards, where the Blink-182 musician performed.

According to TMZ, Kardashian and Barker entered a wedding chapel at 1.30 a.m. on Monday, where they were married by an Elvis impersonator.

The pair also said that they would not allow the venue to take photographs, preferring instead to bring their own photographer.

According to sources close to the couple, the pair possessed a marriage licence and showed it to the chapel’s owner, who also served as a witness.

According to Page Six, the couple isn’t legally married, since they say they didn’t receive a marriage licence.

The couple, called “Kravis,” became engaged in October when Barker proposed on a beach in California with a bouquet of red roses. 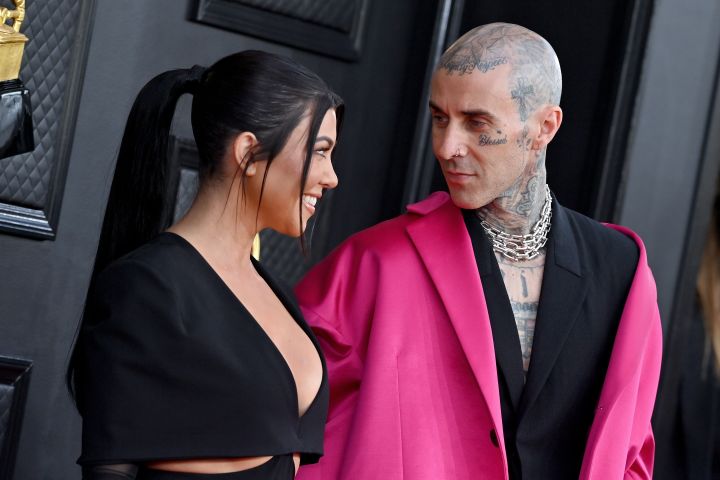 The pair shared photographs of the oldest Kardashian sister wearing a diamond ring and kissing her new fiancée on Instagram with the phrase “forever.”

Kardashian and Barker have made their connection public on social media, and they routinely share photos of themselves together on Instagram.

At the start of 2021, the pair fuelled rumours that they were dating, and they confirmed their relationship around Valentine’s Day.

The duo donned similar all-black ensembles to the Grammys, where Barker performed with Lenny Kravitz and H.E.R.

With her ex-husband, Scott Disick, the reality star and entrepreneur has three children.

Barker, a well-known drummer and music producer, is the father of two children and has been married twice, including to former Miss USA Shanna Moakler.