By Dominic King for the Daily Mail

Germany are set to face a UEFA investigation after Hungary forward Dominik Szoboszlai was hit by an object thrown from the stands.

It was a wretched night on the pitch for Hansi Flick’s team, who saw their hopes of reaching the Nations League finals torpedoed by Hungary in Leipzig, and it was embarrassing for them off it, as Szoboszlai – who plays his club football in this stadium – was felled when taking a first half corner.

The incident in the 37th minute was seen by Slovenian referee Slavko Vincic, who stopped the game for a couple of moments before an announcement was made over the sound system to remind fans not to launch missiles on to the pitch.

With a UEFA delegate also in the Red Bull Arena, it is now inevitable the German FA will have questions to answer about the conduct of a minority in a crowd of 39,513, who left bitterly disappointed by their team’s anaemic efforts and booed them off at the final whistle.

There was a lot riding on this for Germany ahead of the World Cup finals but, Joshua Kimmich aside, they were a pale shadow of what we have come to expect from them. It doesn’t seem right to call a team with such pedigree “witless” but that was the perfect phrase for the hosts.

Hungary, by contrast, were sharp and clever and knew their game plan inside out. It is regrettable their fans have brought them so much negative coverage in recent times, as it has overshadowed how progressive they are as a team. This result, on the back of the 4-0 skewering of England in June, shows they are going places. 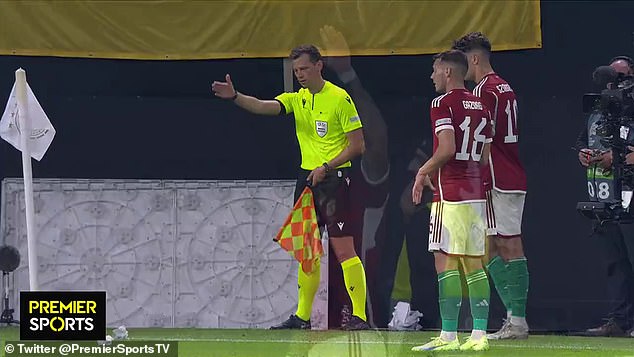 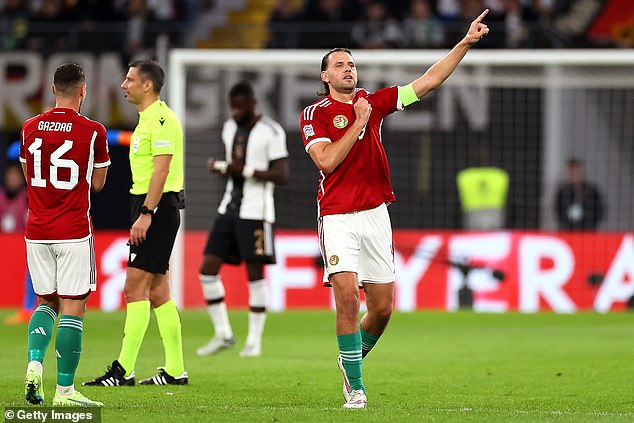 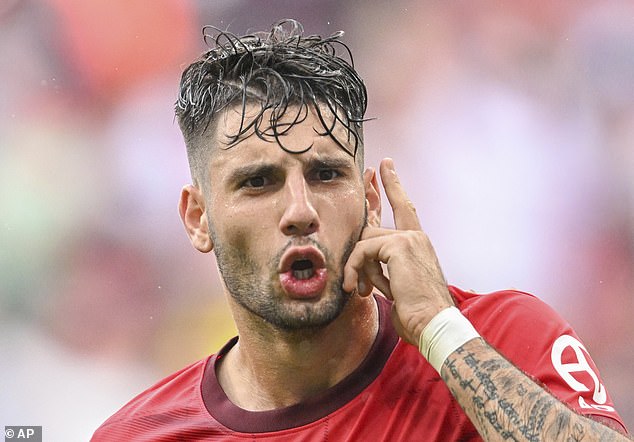 They dominated the opening period, comfortably keeping Germany at arms’ length while always offering a threat when the opportunity to scuttle forward arrived; captain Adam Szalai, who will retire from international football after the final group fixture with Italy, was a particular nuisance.

Szalai, the Basel forward who is now 34, opened the scoring in the 12th minute, deftly flicking his heel backwards to loop Sbozoszlai’s corner – who was showered with objects for the first time – over Marc-Andre Ter Stegen before wheeling away in delight as the ball dropped in at the far post.

Germany were better in the second period, with Bayern Munich pair Sane and Joshua Kimmich both going close, but Hungary deserved to hang on and they had enough opportunities in the closing stages to put a gloss on the scoreline.

As it was, one goal was enough and with 10 points, it now means they need only avoid defeat on Monday when they host Italy to reach the Nations League finals. Germany and England, by contrast, will try to simply save some face at Wembley.

Read Prev1 of 2Read Next
Click ← → (arrow) to continue reading
Share. Facebook Twitter Pinterest LinkedIn Tumblr Email
Previous ArticleAmal Clooney Slips Into Thigh-High Boots & Stella McCartney Knit Dress While Heading to the Train With George Clooney in NYC
Next Article A familiar name tries to make his own mark with the Wild

Taylor Swift says the red scarf in All Too Well is a “metaphor.” The 32-year-old pop…

Tottenham Hotspur needs to ignore the noise and maintain focus

Dior and diamonds: why Jacqueline Fernandez is being accused in a money laundering case

Nostalgic or self-indulgent: Who is the new Daniel Johns exhibition for?

Marilyn Monroe: A life in dates

Gwyneth Paltrow on the power of turning 50: